Reaching a World of Kids in Western Europe

“Sing to the Lord all the earth! Tell of his salvation from day to day. Declare His glory among the nations, His marvelous works among all the peoples!”

There are some things that you don’t really think that much about, and then you move overseas and they become some of the greatest obstacles. Before I moved, language was one of those things. I am currently fighting the never-ending battle to learn French. There are good days and there are bad days. I was recently serving at a VBS and the kids were all throwing grass at each other. I wanted them to stop, but I forgot the word for grass. So I asked one of the boys for help, our conversation went something like this:

Me, in French, pointing at the grass: “What is the word for this?”

7-year-old boy: “Arbre” (This in fact does not mean grass, but means tree)

Me, in French: “Stop throwing trees at each other”

The kids found this really amusing. I did not. There are few things as humbling as having a group of seven year olds laugh at you.

So, while my French is struggling along, any effort to learn any other language is completely gone, it is almost like my brain has no space left. I got the chance to serve at the Young Life Service Project in Albania. In Albania, they speak Albanian. Albanian is not close to French. One of my jobs was the dining hall boss (This is a fancy way of saying I ran from the dining hall to the kitchen and made sure that everyone had food). Everyone in the kitchen, naturally, spoke Albanian. I ran into the kitchen over 100 times over the course of the week, almost always helplessly confused as to how I was going to convey to the kitchen what we needed. One morning, I needed a specific size of bowl. It was like a terrible game of charades. It was hard enough to relay that I needed a bowl, let alone a particular size. I am sure that they pulled out almost all the bowls in the kitchen before we figured it out. God bless those kitchen workers for showing me grace and dealing with request after request, and my terrible attempts to communicate them.

Language has a power that I never fully appreciated before I moved. Recently, I have tried to pause and appreciate the beauty that comes with language. I am constantly reminded of the globalness of God. As I struggled with basic Albanian, God understands it perfectly. Even as I mess up again and again when attempting French, He understands. I often think back to the Tower of Babel. How much easier my life would be if everyone spoke the same language. But sitting in a room full of people who I cannot understand, sitting, praying and worshipping the same God, I am reminded of the grandeur of God. He is greater than language.

So, I am going to keep trying. And I am well aware that learning a new language is an uphill battle. We serve a tree throwing God. A God who is mightier than our mistakes. A God who has compassion. A God who is greater. A God who loves to hear the voice of His children, in all languages.  I challenge you to go to a place where the people don’t speak your language. Listen to worship music in a foreign language. And let the nations rejoice together!

“Sing to the Lord all the earth! Tell of his salvation from day to day. Declare His glory among the nations, His marvelous works among all the peoples!” -1 Chronicles 16:23-24

The past few weeks have been jam packed! At the end of March, Amy and I went to Munich to observe the Young Life International School ministry happening there. It was such an encouraging time, and offered us both a lot of hope for the future of ministry in Grenoble.

Like I said, I was able to do an assignment at the Young Life International Schools Service Project. This was an amazing experience! In addition to working the dining hall, I ran the camp store (which was a wonderful reminder that I am terrible at math and currency conversion. There is nothing like having a store that accepts three currencies. God bless the inventor of the calculator). Opposed to a traditional American Young Life camp, at the service project kids come and do a project for the community. This year, the kids constructed two different playgrounds for two impoverished communities. It was amazing to watch the kids get excited to give back. Camp was incredible.

French schools are on holiday for the next two weeks, so most of our events are also on break, which has been a nice time of rest before the end of the school year push. We have also started getting kids signed up for Surf Camp this summer. I would love for you to join with us in praying for that preparation.

On the 20th, I celebrated six months of living in France! The past six months have been some of the hardest, most amazing, challenging, crazy and fulfilling months of my life. Each day I have been humbled and taken aback by the goodness and faithfulness of God. I am also so thankful for each and every one of your for helping to make this all a reality. Through financial support, prayers and continual encouragement, I could not have done this without you. I am so excited to see what God has planned for the next six months, and beyond!

Visiting my best friend in Turkey 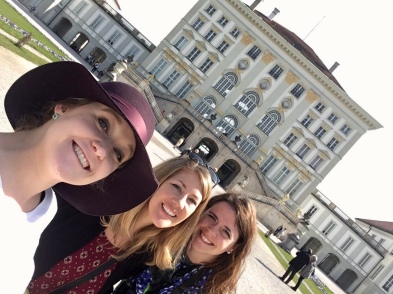 I FOUND WASHINGTON IN FRANCE
Advertisement